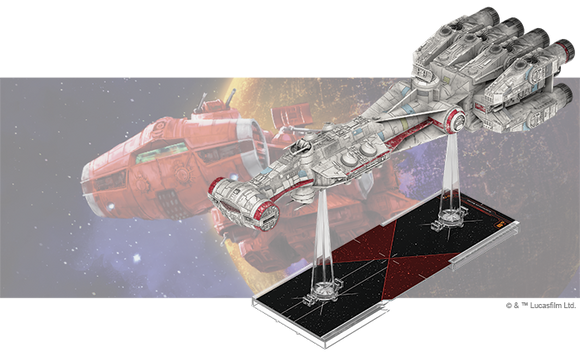 While the CR90 would see initial use within the late Galactic Republic and Imperial Senate, many vessels would be appropriated by the early rebellion and Rebel Alliance against the First Galactic Empire, despite not being designed as a combat-oriented vessel. They were later used by the navies of both the New Republic and the Resistance. read more

The initial printing of the Tantive IV Expansion Pack included the wrong ship dial (the Raider dial instead of the CR90 dial). The CR90 dials found in the Huge Ship Conversion Kit have the correct maneuvers. Players with incorrect dials can contact FFG for a free replacement dial by filling out the form found here: Parts Requests

Retrieved from "https://xwing-miniatures-second-edition.fandom.com/wiki/CR90_Corellian_Corvette?oldid=18998"
Community content is available under CC-BY-SA unless otherwise noted.